One of my favorite lines in Jerry Maguire is when he's trying to win his girl back and keeps babbling and then she says, "you had me at hello". Hello! First impressions are so very important in every aspect of our lives. Most people decide how they feel about us in the first minutes they meet us. After that, the strength and depth of the relationship hinges on time spent together and mutual respect. I've taken these simple letters today and put together a very simple thing to remember… Continue

I received Christ about 15 years ago and my relationship with Jesus has been great, as long as I'm just as thankful and loyal as God is.  I was married to a "christian" girl for eight years and been since divorced 3 years ago.  I thought that my MS diagnosis also 15 years ago was the toughest thing i would have to fight, but divorce threw me for a mental breakdown,

Upon my divorce i threw caution to the wind and sinned relentlessly with women and drugs enough to kill anyone normal,…

Please pray with me for Shea Shaw and her family who are amidst the process of recovering from thier worst life's trauma and are being faced head on with the unknown. Let us offer them hope and prayers in this desperate time of need.

God Bless the Child who is born and unites us in faith, prayer and hope. Amen

After six days Jesus took Peter, James and John with him and led them up a high mountain, where they were all alone. There he was transfigured before them. His clothes became dazzling white, whiter than anyone in the world could bleach them. And there appeared before them Elijah and Moses, who were talking with Jesus. Mark 9:2-4
It's hard…

The Talk of the Town

Mark 5 tells a story about what happened one time the disciples and Jesus made it to the other side of the lake. As soon as Jesus hit the shore he was met by a madman. The Bible says “He lived there among the tombs and graves. No one could restrain him-he couldn't be chained, couldn't be tied down. He had been tied up many times with chains and ropes, but he broke the chains, snapped the ropes. No one was strong enough to tame him.”
You don’t have to go much…
Continue

One of Peter's Prayers of the Bible

Peter Impulsive Peter.....aren't we a bit like you and yet you seem to get the bad "rap" because  your  there in the Scriptures always adding your 2 cents attempting to "help" out the Lord Jesus with your idea of how things should or shouldn't be done.


Peter, out of all your prayers of the bible, this one has got to be the most incredibly bold one that possibly could be prayed: "Master, it is good for us to be here: and…

In John 5 there is a story of a gathering of sick people by the pool of Bethesda. There was a man there that had his condition for 38 years. Jesus makes a visit and asks him a simple question: "do you want to get well?" He begins to make excuses for his condition, he blames others, timing, everything and everyone but himself. But Jesus is merciful and his grace is ALL sufficient. And like everyone else who encountered Jesus , this man is raised up healed and was off the… Continue

Who we shall become (my quiet time thoughts)

I Corin. 13:12 "For now we see in a mirror indirectly, but then we will see face to face. Now I know in part, but then I will know fully, just as I have been fully known."  It is hard to get past who I see in the mirror.  The person I know I am when no one is looking.  But for the person who is a follower of Jesus, I cannot ask myself who am I but who am I becoming?  It is through Him and His unselfish, ultimate act of love on the cross that I… 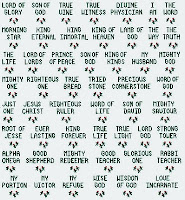 The nations will see your vindication,
and all kings your glory;
you will be called by a new name
that the mouth of the Lord will… Continue

This morning I woke up extremely early, about 4am, because I had a startling yet comforting dream.  The dream took place in my home where I spent most of my life and my parents still live.  In the home, in my dream were my parents, my sister, my brother and sister-in-law and my niece.  I dreamed four tornadoes spawned in the field across the street from ours as I was looking out the front window.  We all hurried downstairs to the basement and I ran to the window at the back of the house…

From Here to There The Gate, (in Olde Norse, Gata), means a way, street or narrow passage.

The gate I have traveled in my life the…

Still Think Your Gift is too Small?

Here is a true story that a brother of mine gave permission to post.  One can truly see that this little girl was About the Masters Business! Her legacy lives on!

Hold on to your seats and have a handkerchief  ready:

Every testimony is personal, unique and miraculous!

This is an invitation for you to share your testimony in the group called "Testimonies". It's always encouraging for others to see what God has done in your life! When you go to the group page, simply "Add a Discussion" so that people can leave comments on your testimony page!

seems so long that you wonder where the light is at the end of the tunnel when hardships happen and you like you will never get out of the darkness.

Hi everyone, just want to let you know that this past Wednesday I had my first therapy session. I never had one before and it had taken me to places I wasn't ready to face but I'm glad it through my church, who know that my church first lady is a license therapist and all my sessions are free and we're meeting on Wednesdays. I never saw this coming but God work in mysterious places when we don't expected it. He is there in the center of it all and I'm looking forward to reach a place were I'm… Continue

My friendship has an anchor

That shows how far its depth

of love will go.

When my anchor hits the bottom core

and I've given all there is to lose

Who can know, or must choose

whether my friendship and my

anchor can go deeper still, or

whether I must move my friendship

and my anchor to deeper waters.

Where it has another chance to

I  would just like to share with you how my Mother's Day weekend went, hectic, busy, but very fun. I am temporarily laid off until the end of June so I decided I am going to take this time to do some work at home but also to have some fun. So,  I heard of the Mother-in Daughter banquet they were having locally and invited my stepdaughter, daughter-in-law, and soon to be daughter-in-law and two of my little grandaughters to go. My stepdaughter had to work but she allowed us to keep our… Continue

HAPPY MOTHERS DAY TO ALL GREAT MOTHER OUT THERE AND HEAR