Your problem is that you are"two tents"

As you and I are about the Masters business it is important that we follow the example of Mary. Scripture declares that she...."hath chosen that good part, which shall not be taken away from her." Luke 10:42. What did she choose? She sat at Jesus' feet and heard His word. v.39

If we are to remain in tact and not become unraveled as Christians, it is imperative that we meditate on the life giving Word of God day and night." Great…

Another week comes to a close!!! Tomorrow is Saturday!  For most of us that means we can create our day rather than having it dictated to us. We can grab some extra time in the morning to read or write and things are not as rushed as they may seem during the week. Life is filled with so much to do that we need to learn how to "balance" all of it.
My life is made up of work and play, worship and rest. Most everything I do fits in these four categories. Work seems to take up a huge chunk and… Continue

Do you really believe Psalm 18?

Every good thing I have comes from you.” The godly people in the land
are my true heroes! Psalm 16:2-3
Each and every day I… Continue

Even strong young lions sometimes go hungry,
but those who trust in the LORD will lack no good thing. PS 34:10
Imagine today that you could live life in such… Continue

I first met Keith when we were young, he was 13 I was 12. We lived in the same county in the 70's. We would see each other occasionally in different places usually a party with other kids, we hung in the same circle of friends at times. Then when he was 15 he moved back to Philly. He would come back to town on occassion so I saw him around. Then when he was 18, me 17 he was boarding a bus to Housten to join the Army.That was the last time I saw him, 35 years later he…

Once I generalize everything in life, aligning with God, peace comes. Knowing that He is in control, I become as a child to this powerful Father. This authority humbles me and causes me to hide in Him. I sometimes go to Him whining and over thinking things. He always bring me to my knees. It is so much better for me to go to my knees first and ask Him to help me to be what He has designed. I've made so many immature choices but Jesus works them out for my good and blesses me.  Those choices… Continue

I have non-retractable migraines, and they usually put me into the hospital. I've been at home for the last 10+ days with one of these migraines. I woke up earlier this morning and I still had the migraine, but 10 minuets ago the migraine just vanished! I've been praying everyday that I've had this migraine that it would just vanish, and it did.

I believe that this has been a working of God.…

"Let us hold fast the confession of our hope without wavering, for He who promised is faithful" Hebrews 10:23

Did you realize that you have the greatest part in shaping the type of day you you will have today?
You can begin talking about things that you desire to see and people you want to interact with and start thinking about what that meeting may look like. I have no problem in the thinking part of this but when it comes to what I say, well, that can be another…

Like Jesus,we need to resist the temptation to jump ahead before receiving the Spirit's direction. Are you waiting and wondering what your next step should be? Don't jump ahead-trust God's timing.

WHY DO SOME FOLKS WAIT TILL THEY…
Continue

Let the Hall-of-Famer in You Arise!

Mickey Mantle, the late Hall-of-Famer for the New York Yankees, was a teenager when the Yankees sent him back to the minors in 1951. Convinced he couldn't make it as a ballplayer, Mantle called his father, who came to Kansas City and found a tearful Mickey ready to quit the game. 'OK, son, if that's all the guts you have, you might as well come home with me and work in the zinc mines,' the elder Mantle said. His dad's challenge stung Mantle back to reality, and he went on to…
Continue

This morning there was a pull from heaven to begin to prayer. I simply felt a "call to prayer". It was a divine call for those that were in my life and those whose lives I am connected to directly and indirectly. I took this "call" as a divine mandate to tune it to God and listen. As I prepared to pray many others allowed me to join with them regarding specific needs that they had in their world.
Something began to happen. It was as if a window in heaven was opening up and God was pouring… Continue

GOD CREATED YOU AS AN ORIGINAL…
Continue

Overcoming the Pain of Yesterday

Chapter 24- Overcoming the Pain of Yesterday

(Rough draft chapter from my next book)

25And I will restore or replace for you the years that the locust has eaten--the hopping locust, the stripping locust, and the crawling locust, My great army which I sent…

A Form of Godliness

In 2 Timothy 3 it talks about how bad things will continue to get as we move towards the return of Christ. After a list of terrible characteristics it speaks of people who will have a "form of godliness but deny its power."…
Continue

DON'T WORRY ABOUT PEOPLE FROM…
Continue

A song written out of desperation

I wrote this song in the midst of divorce looking for some hope and help for the future. I adapted it to a play that our church did last year to go with the story of Jairus and his 12 yr old daughter that was sick and needed to be healed by Jesus. MARK Chapter 5

You can also download this through itunes:) Blessings to all of you! 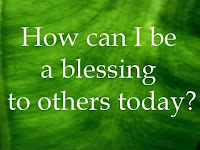 The bible says "do not repay evil with evil or insult with insult, but with blessing..." It seems much easier to say than it does to do. The natural response most of us have to anyone that insults us is to come back with an insult of our… Continue